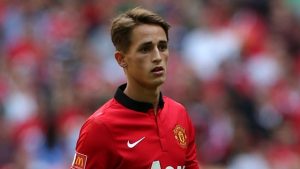 Manchester United midfielder Adnan Januzaj could be moving to Italian Serie A in the summer transfer window, according to reports in Italy.

The Belgium international is no longer an important member of the squad at Old Trafford and he will be allowed to leave this summer.

And while the club would consider allowing him to leave on a season-long loan, Januzaj himself would prefer a permanent move.

Reports in Italy suggest that both Fiorentina and AC Milan are keen on the 21-year-old footballer, whose loan deal with Borussia Dortmund was cut short after he had failed to impress at Signal-Iduna Park.

The Rossoneri are in the market for attacking reinforcements after allowing Jeremy Menez to join Bordeaux, with Carlos Bacca also nearing summer exit.

Fiorentina, too, are short of options up front, but Januzaj appears to be their back-up option in case they fail to lure Cristian Tello back to Artemio Franchi.

The Belgian winger is also on the radar of Sunderland, as David Moyes wants to get reunited with the player he worked with at Old Trafford.