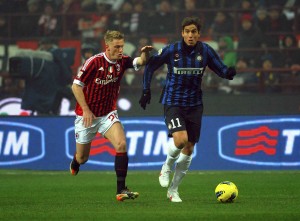 Derby della Madonnina may not be a title decider this season, but everything suggests it will be just as interesting as if it were.

Inter not only need a victory to spoil the party for Milan, but also to keep their European hopes alive, whereas the Rossoneri are aware the title race will be over if they lose at Meazza.

The game against Milan will be the ultimate test for young coach Andrea Stramaccioni as well as a perfect opportunity to prove he deserves to be given the job on permanent basis.

The former Primavera boss has had a bright start to his career as Inter head coach, having recorded 4 wins and 2 draws in his first six games in charge, and midweek’s defeat to Parma was his first setback.

The 3-1 loss at Tardini left Inter three points adrift of third-placed Napoli and one point behind Europa League places, so this is clearly a must-win game for the Neroazzurri.

Cristian Chivu and Luc Castaignos are sidelined through injury, whereas Fredy Guarin is expected to deputize for Dejan Stankovic, who is set to undergo an Achilles surgery.

Milan have done really well this season and the mere fact they are some 19 points in front of third-placed Napoli speaks volumes about their showings this season.

However, in spite of all their efforts, the Rossoneri just couldn’t keep up with amazing Juventus and they look set to miss out on the Serie A title.

Max Allegri’s side were given a lifeline in midweek as Gianluigi Buffon’s shocking blunder allowed Lecce to take one point from Juventus Arena, thus helping Milan close the gap to just one point.

This is likely to give the Rossoneri an extra boost before the clash with their arch rivals, in which they are 2.10 (11/10) with Ladbrokes to claim maximum points.

Clarence Seedorf, Alexandre Pato, Urby Emanuelson, Flavio Roma and Pippo Inzaghi are out through injury, while both Thiago Silva and Ignazio Abate are major doubts.