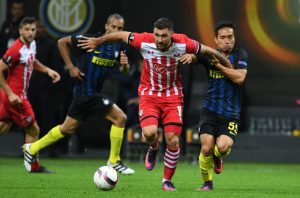 The Nerazzurri have enjoyed a remarkable start to the new season under Luciano Spalletti, who is once again proving his credentials at the big stage.

Inter Milan occupy second place in the overall standings after nine games, having recorded 7 wins and 2 draws, and they are one of just two unbeaten sides so far.

Following a three-match winning run that included a derby triumph over AC Milan, the Nerazzurri faced a genuine test to their title ambitions as they played leaders Napoli on the road.

Even though the Azzurri dominated the encounter throughout, Inter Milan managed to hold Maurizio Sarri’s side to a goalless draw, meaning they head into the Sampdoria clash in great spirits.

The Nerazzurri are now available at 1.44 (4/9) to return to winning ways and place extra pressure on title rivals Napoli, Juventus and AS Roma.

Apart from Marcelo Brozovic and talented defender Zinho Vanheusden, Luciano Spalletti will have fully fit squad to select from.

Sampdoria have been without a doubt one of the surprise packages of the current campaign, having had an excellent start to the season.

Even with one game in hand, the Blucerchiati occupy sixth place in the overall standings, and they are in very good form at the moment.

The Blucerchiati appear to be somewhat struggling on the road, although 1-2-1 record is not too shabby, especially with the team quite impressive on home soil.

The likes of Quagliarelala, Zapata and Caprari have so far scored 11 league goals between them and there are no doubts they will pose a serious threat to Inter Milan defenders.

Experienced goalkeeper Emiliano Viviano misses out through injury, but there are no other worries for Marco Giampaolo.