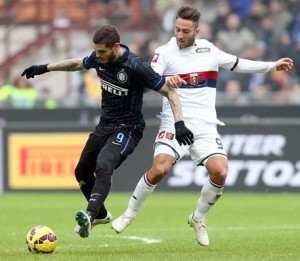 Following yet another impressive triumph, Genoa have the opportunity to all but secure the final Europa League berth by defeating Inter at their Stadio Luigi Ferraris.

The Nerazzurri’s European hopes suffered a major blow as they were beaten by second-string Juventus side, and only a win against the Rossoblu would keep them in contention for a top 6 finish.

While many are talking about Sampdoria’s excellent displays this season, chances are that Genoa have got to be regarded as the biggest surprise package of the campaign.

The Rossoblu were not even expected to achieve a top table finish, let alone fight for European positions, but Gian Piero Gasperini and his men have proved all the doubters wrong.

Genoa have been especially impressive during the season finale, winning six of last eight matches to climb to sixth in the overall standings and all they need to do now is stay there and they will qualify for Europe.

The Rossoblu are brimming with confidence on the back of 5-1 and 4-1 wins over Torino and Atalanta, so no wonder they have been made 2.65 (33/20) favourites to defeat Inter.

The hosts will have Tino Costa and Sebastian De Maio back from suspension, but they still have a long list of unavailable footballers.

While club officials are working hard on summer reinforcements, Inter Milan move further away from Europa League positions and everything suggests they will not be playing European football next season.

The Nerazzurri revived their hopes with a string of good results that included wins over Roma, Udinese and Lazio, and they had a very good opportunity to extend the promising run having hosted second string Juventus side that had already secured the league trophy.

Things started well as Mauro Icardi opened the scoring, but Inter eventually had to settle for a 2-1 loss as Claudio Marchisio and Alvaro Morata netted for the visitors.

As a result, the Nerazzurri sit four points behind their next opponents and can be backed at 2.75 (7/4) to win at Stadio Luigi Ferraris.

Roberto Mancini will have Hernanes back from suspension, meaning that Xherdan Shaqiri will again be relegated to the bench.

Fredy Guarin is not yet ready to return from injury, while Jonathan, Hugo Campagnaro and Dodo remain long-term casualties.