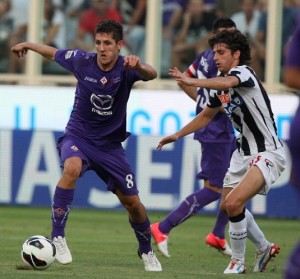 Fiorentina will be looking to forget all about the embarrassing 4-0 loss to AS Roma and extend the good home run against Udinese.

The Zebrette have been blowing hot and cold this season, but they head to Artemio Franchi high on confidence after the recent uptrend in form.

Over the last few years, Fiorentina have at times show glimpses of quality, but their attempts to secure Champions League football failed big time.

The 4-0 defeat to AS Roma saw Viola slip to eighth in the league standings and it is now clear that a top 3 finish will remain just a dream for at least one more year.

Sitting five points behind Europa League positions, Fiorentina still have time to revive their top 5 bid, but they now also have European campaign to worry about.

Namely, while facing Udinese, AC Milan and Torino in Serie A, Viola will also contest two matches against Borussia M’gladbach by the end of the month, and the busy schedule starts with the Udinese clash.

Fiorentina have been made 1.67 (4/6) favourites to win Saturday’s game, and further improve their 5-6-0 home record in the league this season.

Head coach Paulo Sousa will be hoping to have top scorer Nikola Kalinic back in contention, but Carlos Sanchez misses out through suspension.

While many consider them to be one of Europe’s most boring sides due to their constant mid table finishes, Udinese are perfectly happy with their “achievements” so far.

The Zebrette have absolutely no European ambitions, or rather lack the quality to challenge for Europa League places, but they also have no problems staying alive season after season.

Twenty three games into the new campaign and Udinese sit 15 points clear of the bottom three, which is exactly where they want to be.

The Zebrette did well to recover from a three-match losing run as they first defeated AC Milan at home before holding Chievo to a goalless draw in Verona.

Udinese have already won three away games in the current campaign, but also failed to score on their last three fixtures on the road, and that is a cause for concern.

Emmanuel Agyemang-Badu returns from Africa Cup of Nations duty, but Assane Gnoukouri is unavailable for selection due to heart problems.