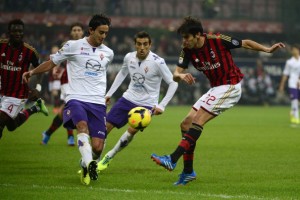 Fiorentina recovered well from the opening loss to Juventus and they now have a chance to edge even closer to top 3 positions with a win over AC Milan.

The Rossoneri climbed to sixth thanks to back to back triumphs over Sampdoria and Lazio, and it remains to be seen whether they can see off Viola as well.

Despite showing signs of promise in recent years, Fiorentina were unable to secure Champions League qualification and a top 3 finish remains their primary objective.

There have been no major changes to the playing squad at Artemio Franchi this summer, so nobody was surprised to see Viola enjoy a decent start to the new season.

Following the unfortunate defeat to rivals Juventus, Viola defeated Chievo and AS Roma at home, while sharing spoils with Udinese, and they now sit in tenth position with a game in hand.

Fiorentina also started their Europa League campaign brightly, defeating PAOK at home, and they are now 2.30 (13/10) to extend the good run against AC Milan.

David Astori and Matias Vecino both face fitness tests, whereas Josip Ilicic and Nikola Kalinic should be recalled to the side.

Just like their next opponents, AC Milan have been trying to return to old glory days, but they have had little to no success of late.

While the Rossoneri are waiting for the new owners to allocate funds for the January transfer window, they need to be focused on the current campaign, and this has probably been their best start in years.

With three wins in first five fixtures, AC Milan sit just one point behind Champions League positions and they head to Artemio Franchi in great spirits.

Carlos Bacca again came to the rescue, scoring the opener against Lazio, before M’Baye Niang added the second from the penalty spot and no doubt the Colombian will be looking to make life difficult for Fiorentina defenders as well.

After bagging five goals in as many league outings this term, Bacca can be backed at 2.75 (7/4) to score anytime vs Viola.

The visitors are still without Matias Fernandez, Andrea Bertolacci and Cristian Zapata, but there are no fresh injury worries.