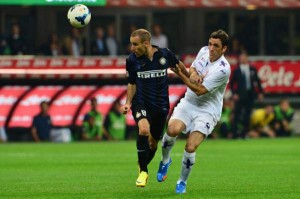 Buoyed by the midweek triumph over Udinese that saw them qualify for Coppa Italia final, Fiorentina hope to defeat Inter at Artemio Franchi and put extra pressure on top 3 rivals Napoli.

The Nerazzurri finally ended a six-match winless run as they beat Sassuolo, but they clear face a much tougher task in Tuscany.

Viola have come a long way over the last couple of years, having battled for Serie A survival just two years back and now find themselves vying for Champions League positions.

Fiorentina have just secured their first appearance in a major final since 2001 having pipped Udinese to a place in the Coppa Italia final, and now they can fully focus on their league campaign.

Despite everything thrown their way, Vincenzo Montella’s side sit mere three points behind third-placed Napoli and they are priced at 4.00 (3/1) to achieve a top 3 finish.

And having won their last two matches at Artemio Franchi without conceding a single goal in the process, Viola are 2.15 (23/20) to see off Inter as well.

Key midfielder Borja Valero is banned for the Inter game, whereas Stefan Savic has moved to the infirmary after suffering a thigh injury.

Mario Gomez is in contention to make his first appearance after five months, whereas Nenad Tomovic is doubtful and Giuseppe Rossi, Massimo Ambrosini, Ante Rebic and Ahmed Hegazy are injured.

Inter Milan have embarked on a new era after Massimo Moratti handed over the reigns to Erick Thohir, with the squad set to major rebuilding in the summer.

At the same time, boss Walter Mazzarri and his men will try and get the most out of the current season, with Europa League qualification the minimum they will accept.

The Nerazzurri will try and revive their top 3 bid, but with them sitting 11 points adrift of Champions League positions at the moment, that is clearly not a realistic goal.

The good news is Inter finally managed to end dismal run of results as they enjoyed a hard-fought win over struggling Sassuolo, but the match at Artemio Franchi will be a whole different ball game.

And given the way they Nerazzurri are playing at the moment, odds of 1.75 (3/4) offered on Inter not to lose are not too tempting.

Walter Mazzarri has doubts over the fitness of Hernanes, Esteban Cambiasso and Mateo Kovacic, whilst Christian Chivu and Ricky Alvarez are definitely out.