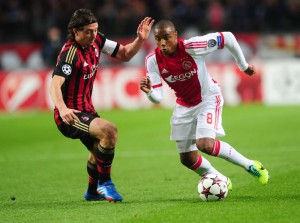 Sitting pretty in fifth position in Serie A, Atalanta can all but secure European qualification with a win or draw against AC Milan.

The Rossoneri, on the other hand, need to remain in sixth place if they are to qualify for Europa League, with both Inter Milan and Fiorentina three points behind.

This will clearly go down as one of the most successful seasons in Atalanta’s history and it is fair to say that Gian Piero Gasperini’s side fully deserved the enviable league position.

Oribici started the season strongly and never looked back, with even Napoli coach Maurizio Sarri admitting Atalanta to be the only side to have outplayed the Azzurri this term.

The side from Bergamo have been pretty impressive since they were knocked out of Coppa Italia at the turn of the year, losing just one of last 15 Serie A fixtures.

Not even the 7-1 hammering at the hands of Inter Milan could derail their top 5 bid and Atalanta now head into the AC Milan clash six points clear of their next opponents.

Atalanta are also unbeaten in last nine home games (W6 D3), and they have been made 2.15 (23/20) favourites to claim maximum points.

Key midfielder Papu Gomez and Franck Kessie return to the side, but Zukanovic, Drame and Konko are out injured.

AC Milan have made some progress under Vincenzo Montella, building a solid base for years to come, and a top 6 finish that appears on the cards can be seen as success for the club.

The Rossoneri will spend heavily in the summer transfer window as the money from the new owners is made available to the sporting department, but they first need to try and finish the current campaign in the best possible way.

AC Milan largely struggled of late, taking just two points out of possible 12, but so did their rivals for European positions, allowing the Rossoneri to create a three-point gap between them and local rivals Inter Milan.

Lucas Ocampos and Gabriel Paletta are both suspended, whereas Alessio Romagnoli could return from a knee injury.

Gianluca Lapadula is likely to be preferred to Carlos Bacca, whereas Giacomo Bonaventura, Ignazio Abate and Luca Antonelli are definitely out.