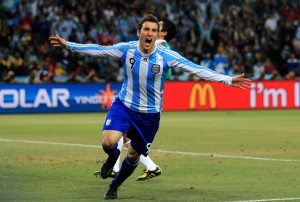 The father and agent of Napoli striker Gonzalo Higuain has suggested that quite a few clubs are after the forward’s signature.

The former Real Madrid star is being heavily linked with a summer exit despite enjoying a good start to his career at Stadio San Paolo.

And while his father reveals heavy interest in the player’s services, Jorge Higuain does not believe his son will be leaving the Azzurri this summer.

“There are a lot of teams interested in Gonzalo,” he told El Crack Deportivo. “However, he has a three-year contract to run with Napoli. I do not think he will go anywhere.”

The highly rated forward is 1.50 (1/2) to remain with the Azzurri after the summer, while being priced at 4.00 (3/1) to join Liverpool in the summer transfer window.

The Argentine has scored a total of 33 goals in 67 Serie A appearances, while also bagging 15 goals in 26 European fixtures.