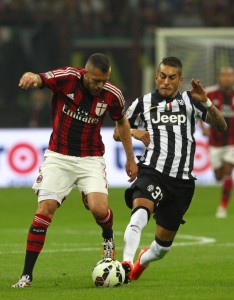 Revived AC Milan are enjoying the best run of form in recent years, and they will be hoping to end a five-match losing streak in meetings with Juventus.

The Bianconeri sit five points clear at the Serie A summit, and they will be searching for fifth successive league triumph when they arrive at San Siro.

AC Milan have endured some tough times of late, ever since they decided to cash in on Zlatan Ibrahimovic and Thiago Silva, but the club may be on the road to recovery.

New Chinese owners seem to have ambitious plans for the San Siro outfit, while the current crop of players is doing really well under the guidance of Vincenzo Montella.

The Rossoneri have successfully recovered from a slow start, going on to win four of last five Serie A fixtures and climbing to third in the overall standings.

AC Milan have been bagging goals for fun of late, putting seven past Chievo and Sassuolo, but they have also been leaking goals at the back, which is a cause for concern ahead of the Juventus game.

Vincenzo Montella still has a number of important players on the sidelines as Riccardo Montolivo, Andrea Bertolacci, Luca Antonelli and Mati Fernandez are all unavailable.

Top scorer Carlos Bacca will be recalled to the starting line-up, while Ignazio Abate should start on the right flank considering that Davide Calabria is struggling for fitness.

Eight games into the new Serie A campaign and Juventus are already five points clear at the top of the standings, meaning this could prove to be yet another boring title race.

The Bianconeri are again on one of their trademark winning runs where they tend to keep a clean sheet in addition to claiming maximum points, having conceded just one goal in last six.

Said winning streak could have easily ended at Parc OL, but Juventus managed to score the winner with ten men on the pitch after Alexandre Lacezette had previously missed from the penalty spot.

They could face another difficult fixture against revived AC Milan, but the Bianconeri remain 1.83 (5/6) favourites to extend the impressive run of results.

Mario Lemina looks set to pay the price for the red card against Lyon as Hernanes should be preferred in the middle of the park, playing alongside Miralem Pjanic and Sami Khedira.