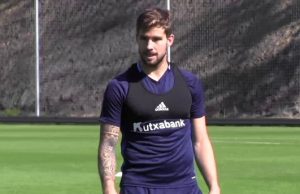 The 26-year-old Real Sociedad defender Inigo Martinez has been the subject of intense transfer chase involving some of Europe’s biggest clubs.

The likes of Barcelona, Manchester City, Juventus and Inter Milan are believed to be leading a four-way race for the signature of the Spanish international.

Compared with Barcelona legendary defender Carles Puyol for his style of play, Inigo Martinez is a left-footed centre-back who is renowned for his strength and aerial presence in the box.

He made his senior debut in 2011 and has so far made 194 La Liga appearances for the Basque side and scored 15 goals.

Martinez is contracted to Real Sociedad until June 2021 and reports in Spain suggest he is ready to quit his club for a new challenge. According to reports from Mundo Deportivo, Italy is a preferred destination for the 26-year-old with Bianconeri appearing to be the favourites for his signature.

However, backed by their new owners in attempt to rebuild squad and return the club to former glory, Inter Milan are unwilling to give up on the Spaniard and appear willing to beat competition to the signature of Martinez by activating his release clause which stands at €32 million.

Nerazzurri are willing to offer the player yearly wages in excess of €4 million which they hope would be enough to make his forget about the Juventus possibility.