Will you be the first Titan Poker Heads-Up Champion? 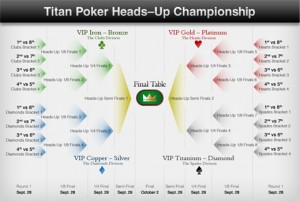 Titan Poker celebrates 6 Year anniversary by organizing a unique Heads-Up Championship, giving the players a chance to prove their poker skills and win their share of over $25,000 in total prize money.

Qualify for the Heads-Up Championship by winning one of their eight 24 Hour Races (all Points) running throughout September. Races will run twice a week on Sundays and Tuesdays. Players will be divided into four divisions according to their VIP levels. Each division will have their own 24 Hour Races:

The 24 Hour Races will be held every Sunday and Tuesday from September 4th to September 27th. All the winners from each race will qualify for the Heads-Up Championship.

Think you have what it takes to beat any poker player in a heads-up? Prove your heads-up skills and win $3,000 as well as recognition as the best heads-up player!

All the winners from Phase I will square off against each other in heads-up tournaments. The winners from each 24 Hour Race will receive ranking based on their race number that they won. For example, if you won the first 24 Hour Race then your ranking will be “1st” and so on and so forth.

The competition will be spread out over a 5 day period. The first round and 1/8 Final matchups will take place on Wednesday, September 28th and the 1/4 Finals and Semi-Finals will follow the next day, Thursday, September 29th. The Finals will be played out on Sunday, October 2nd.