Sweden vs Republic of Ireland preview 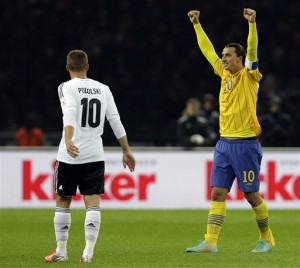 The match may be played at Friends Arena in Solna, but Sweden and Ireland will see each other as genuine nemesis in the battle for the second place in the standings.

Sweden national team chiefs surprisingly opted to put their faith in coach Erik Hamren in spite of team’s disappointing showing at the Euro 2012, and that soon proved to be a very good decision.

The Nordic country avoided any surprises by beating Kazakhstan and Faroe Islands in their two opening 2014 World Cup qualifiers, before producing one of the biggest comebacks in modern football.

Sweden came from four goals behind in less than half an hour to earn one point against Germany in Berlin, thus making sure they remain in the race for automatic qualification.

Having since won three friendly game before losing to Argentina, Erik Hamren’s side are 1.53 (8/15) favourites at Paddy Power to see off Ireland.

The hosts will be heavily relying on magnificent Zlatan Ibrahimovic, who is 1.85 (17/20) at Sportingbet to score at any time.

Erik Hamren has handed a first call-up to Turkish-based midfielder Erkan Zengin, but Alexander Gerndt has pulled out of the squad.

Republic of Ireland, too, failed to live up to the expectations at the Euro 2012, even though nobody had really expected them to progress from the group that contained the likes of Spain, Italy and Croatia.

Giovanni Trapattoni’s side started the 2014 World Cup qualifiers brightly, even if they were pretty fortunate to win in Kazakhstan, having scored two goals in the dying moments of the match.

They were then completely embarrassed in the 6-1 home defeat to Germany, but 4-1 away win over Faroe Islands helped the players restore some of the lost confidence.

Meanwhile, the Irish have lost to Greece and beaten Poland in two friendly games, but they enter this crucial qualifier low on confidence after a number of first team regulars were forced to withdraw due to injury.

Even the odds of 7.80 (34/5) offered at Betfair on away win are enough to suggest that Ireland face a mountain to climb in Solna.

David Forde and Glenn Whelan have resumed full training, but Paul McShane, Aiden McGeady and Anthony Pilkington are out injured.

Register Now
Bet In-Play on today's matches with Bet365 and get £200 for FREE
We Highly Recommend These Places
Share your Opinion!