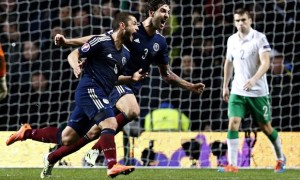 Slovakia are in all sorts of problems after losing their first two qualifiers, meaning this is a perfect example of a must-win game.

Scotland, on the other hand, will have something to prove as well, having failed to defeat minnows Lithuania at home few days ago.

Slovakia fared pretty well at the Euro 2016 finals, progressing from a difficult group before they were stopped by star-studded Germany, but the team faced plenty of problems ahead of the new campaign.

While Stanislav Sestak retired from international duty, a number of high-profile footballers missed either one or both fixtures in September and October.

As a result, Slovakia succumbed to back to back defeats to England and Slovenia, thus seriously damaging their qualifying chances.

Nevertheless, there is still time for Repre to turn things around and they are now available at 2.25 (5/4) to return to winning ways against Scotland.

Captain Martin Skrtel returns from suspension, but now Tomas Hubocan is banned, while the injury list is still quite long.

The likes of Ondrej Duda, Peter Pekarik, Norbert Gyomber and Viktor Pecovsky are all unavailable for selection at the moment.

Scotland are determined to make amends for the unsuccessful Euro 2016 qualifying campaign, and the 5-1 hammering of Malta on the road hinted Gordon Strachan’s charges were ready to fight for one of the top two positions.

However, when everybody expected them to ease off to a home win over Lithuania, the Tartan Army were left salvaging one point, scoring late to secure a 1-1 draw.

With England and Slovenia winning at the weekend, that could prove a costly slip-up, although Scotland have a chance to make things right with a good result in Slovakia.

The fact that Repre are in desperate need of a win could help the visitors adopt a defence-minded approach and attempt to hit the opposition on the break, just like they did in a March friendly vs Czech Republic.

Captain Darren Fletcher is struggling through a dead leg, meaning that James McArthur could start in midfield against Slovakia.

Chris Martin and Oliver Burke could be dropped as well, with Jamie Forrest and Leigh Griffiths tipped to start in their place.