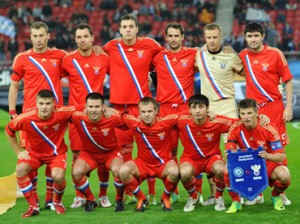 Russia start their Euro 2012 preparations by playing host to Uruguay, one of the best South American national teams and winners of last year’s Copa America.

Dick Advocaat’s side have done really well to qualify for the final tournament after beating Republic of Ireland and Slovakia to the first place in Group B, finishing the campaign with 23 points from 10 matches.

They have since shared spoils with Greece and beat Denmark away in the next two warm-up games, but the match against very good Uruguay side will be a real test for Dick Advocaat’s team.

The Dutch boss has already named provisional Russia squad for the final tournament, which contains the likes of Kerzhakov, Arshavin, Pavlyuchenko, Pogrebnyak and Zhirkov, among others, but also Sporting Lisbon midfielder Marat Izamailov, who returns after a five-year absence.

Roman Shishkin has missed one training session with a stomach problem, but he should be in contention for the Uruguay game. CSKA Moscow defender Vasili Berezutski was forced to withdraw because of injury.

Russia will give their best to start their Euro 2012 preparations with a win and they are 2.38 (11/8) with bet365 to win at Stadion Lokmotiv in Moscow.

Uruguay national team have seen a major uptrend over the last few years, that is ever since experienced boss Oscar Tabarez took over the reigns.

Following the third-place finish at 2010 World Cup in South Africa, La Celeste proved their worth by winning the 2011 Copa America title and, as things stand, they will be one of the favourites for the trophy at 2014 World Cup.

Uruguay started the 2014 World Cup qualifying campaign strongly, beating Bolivia and Chile at home and bringing one point from Paraguay, before extending their unbeaten run to 14 games with an away win over Italy and 1-1 draw in Romania.

With Oscar Tabarez set to field his strongest side against Russia, odds of 3.25 (9/4) offered by BetVictory on away win do look tempting.

According to the latest reports, attacking trident of Forlan, Suarez and Cavani will be unleashed from the start, which should guarantee us an exciting encounter in Moscow.