Real Madrid bid for Miralem Pjanić knocked back by Juventus 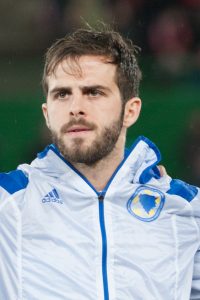 Real Madrid have reportedly had a bid rejected for Juventus midfielder Miralem Pjanić by the Italian giants, according to reports.

Italian newspaper Tuttosport suggest that Julen Lopetegui is keen on acquiring the services of the midfielder and has already tabled a bid of 60million euros. However, the offer has been rejected out of hand by the Old Lady, with Pjanić instead reportedly close to signing a new contract in Turin.

Los Blancos want to apparently bolster their options in the middle of the park following Mateo Kovačić’s loan move to Chelsea last week. They have also been linked to Thiago Alcantara, but Pjanić does not look like he will be making to the switch to the Santiago Bernabeu any time soon.

Spanish rivals Barcelona were touted to be admirers of the Bosnian midfielder but they were put off by his 80million euro price tag.

In his time with Juventus, he has made 91 appearances for the club, scoring 15 goals. Prior to his 32million euro switch to the Italian champions in 2016, he developed his reputation in Serie A with AS Roma. He made 185 appearances in his time in the capital and scored 30 goals, including 12 in his final season.

Before that, he also represented Lyon and Metz.

Elsewhere, Real Madrid are at 6/1 with bookies BetVictor to sign Chelsea forward Eden Hazard before the end of the international transfer window on 31st August.