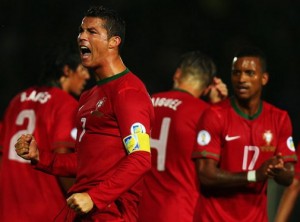 Portugal will have been injected with a fresh dosage of confidence after their energy-sapping extra time win over Croatia, but so will Poland who managed to go through to the quarter-finals after yet another below-par performance against Switzerland.

Much more was expected from Poland, who were considered dark horses of the tournament in France. Led by the Bayern Munich forward Robert Lewandowski, the team’s top scorer in the qualifying, Polish team were a blunt force upfront with both Lewandowski and Arkadiusz Milik losing their cutting edge.

Polish strikers will need to be more clinical up front as their team wonders how they got this far without their key men firing on all cylinders.

Adam Nawalka is not concerned however, claiming that Roberto Lewandowski is still doing a great job for his team and is happy to wait a bit more for his forward to put his scoring boots back on.

Bayern Munich striker is looking at the betting odds of 3.5 (5/2) @BetVictor to find the back of the net against Portugal.

To be fair to Poland, they have displayed excellent defending thus far in the tournament as Xherdan Shaqiri’s fantastic overhead kick was the only goal Polish conceded this summer in France.

Poland manager is not expected to make changes to his line up to the team which dispatched Swiss team after penalties.

Lukasz Fabianski is set to continue in goal with Szczesny still struggling with a thigh injury.

Having drawn all of their group stage matches, Portugal rose to the occasion when it was needed the most and have put in a gritty display to dispatch one of tournament’s biggest surprises Croatia.

Portugal grinded out the result once again and fans will be eager to see their team sweep opponents aside, hoping that Croatia confidence boost would be enough for an inspiring performance against Poland.

Fernando Santos has been pragmatic and tactical in his approach towards the last match having witnessed his team struggle to get the job done in the group stage. Experience is on Portugal’s side though as Cristiano Ronaldo and teammates know what it takes to win big matches.

Portugal manager is expected to make a couple of changes to his line-up as several players will be expecting a reward for their displays.

Match winner Ricardo Quaresma will be hopeful to have convinced Santos to give him a starting berth, but so will Renato Sanches, who added much needed impetus and speed to Portugal last time out. Former Benfica starlet has sparked the attack that lead towards the goal against Croatia and his influence has been immense.

Cristiano Ronaldo will once again lead the line and Real Madrid star will be expected to extend his goal scoring tally after a brilliant performance against Hungary.