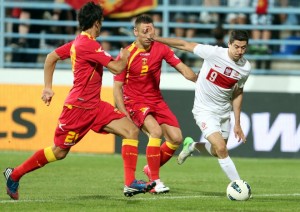 Euro 2012 hosts Poland are still in the running for the top 2 places in Group H, but their chances of reaching the tournament finals will be next to none if they fail to win this game.

Meanwhile, Montenegro lead the chase at the moment, but having lost at home to Ukraine, the Brave Falcons need to try and get at least one point from Warsaw.

The major competition awarded to Poland was expected to be a huge lift for both the country and its national team, but the White Eagles haven’t quite managed to make the most of this opportunity.

While crashing out in group stage at the Euro 2012, the team showed some improvement in the 2014 World Cup qualifiers, taking five points from opening games against Montenegro, Moldova and England.

However, it was the 3-1 home defeat to Ukraine that made their life difficult, while 1-1 draw with Moldova in their final group game left them in a very difficult position.

After hosting group leaders Montenegro, Poland play San Marino, Ukraine and England away, so it is perfectly clear they need to win this game if they are to keep their qualifying hopes alive.

Nevertheless, with some important players missing out, there is no value in odds of 2.00 (1/1) offered at Sportingbet on home win.

Borussia Dortmund defender Lukasz Piszczek hasn’t even made the squad due to injury, while Artur Sobiech, Arkadiusz Milik and Jakub Kosecki have all withdrawn, while Bartlomiej Pawlowski was relegated to the Under-21 squad.

Montenegro’s World Cup dream is still alive, but the reality is the team have missed an excellent opportunity to virtually secure the first place in the standings.

Following a brilliant start to the qualifying campaign, the Brave Falcons recorded an embarrassing 4-0 home defeat to Ukraine, but the good news is they have, nonetheless, remained at the top.

With three games to go, Montenegro sit two points clear of England, who have a game in hand, so no doubt next month’s match at Wembley is going to decide the winner of the group.

In order to keep their hopes of winning the group alive, the Brave Falcons need to win in Poland, and they are no less than 4.20 (16/5) with Betfred to surprise their opponents.

Important midfielders Simon Vukcevic and Nikola Drincic have been recalled, but defender Marko Simic is injured and Milorad Pekovic is doubtful.

The most important thing is that key attacker Mirko Vucinic has recovered from a heel injury and is ready to partner Stevan Jovetic up front. Savo Pavicevic and Vladimir Volkov are suspended.