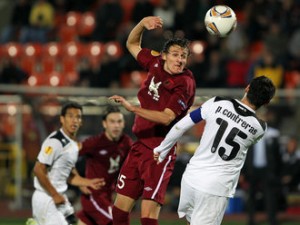 While PAOK have secured progress to the next stage, Rubin are very close to doing so as they are likely to go through even if they lose in Greece.

However, with the two sides just one point apart, both PAOK and Rubin are expected to go for a win that would see them win first place in the group.

The Greek side started the Europa League campaign slowly as they failed to beat second string Tottenham side at home, but they quickly made amends by bringing one point from Kazan.

After the double win over Shamrock Rovers, the Black and Whites produced quite a coup by beating Tottenham at White Hart Lane and they thus ensured their place in the next stage.

PAOK can now finish as group leaders even with one point from this match and with Rubin needing one point to qualify, no wonder that odds on draw are just 2.45 (29/20) at 188BET.

Vieirinha has returned into action after missing the Tottenham clash through injury and he is expected to start, but Konstantinos Stafylidis is suspended.

Rubin Kazan have completed the transition from the virtually unknown club to the one fighting for both domestic and European honours in a very short time and Kurban Berdyev’s side are now rightly considered one of the favourites for Europa League trophy.

After several very successful Champions League campaigns, the Russian club did miss out on Europe’s top competition this term, but they are so far doing really well in Europa League.

Back to back wins over Tottenham and Shamrock Rovers saw Rubin climb to second place in the standings and they are now three points clear of second-placed Tottenham.

That basically means that the Russians only need one point to go through, although a win over PAOK would see them finish in first place. Away win pays 3.10 (21/10) at bet365.

Rubin has spent last week on a training camp in Spain, preparing for the crucial Europa League game against PAOK.