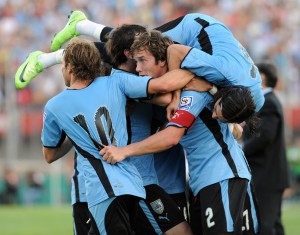 Uruguay coach Oscar Tabarez has announced the final squad of 23 players who will take part in the 43rd edition of the Copa America in Argentina.

Uruguay, who are considered one of the tournament favourites following their impressive showing at the 2010 World Cup in South Africa, have been placed in a very difficult group alongside Mexico, Chile and Peru.

La Celeste are, nevertheless, seen as third favourites of the tournament and they are 13.00 (12/1) with Victor Chandler to lift the coveted trophy.

Coach Oscar Tabarez has recently announced the final squad for the tournament that takes place in Argentina, serving up a couple of surprises in the process.

On the other hand, Abel Hernandez, Sebastian Coates, Cristian Rodriguez and Alvaro Gonzalez are the four players that did not take part at the 2010 World Cup.

Uruguay start their Copa America campaign on Monday evening and La Celeste are 1.40 (2/5) with 888Sport to win their opening game against Peru.