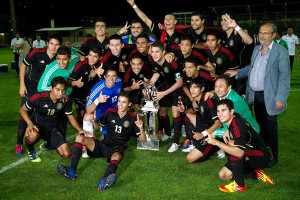 Mexico Olympic squad eased off to their place at the final tournament, having won all three qualifying games against Honduras, Panama and Trinidad and Tobago, before lifting the title at the friendly tournament in Toulon by beating Turkey 3-0 in the final. Luis Fernando Tena’s side thus arrive to the 2012 Olympics in high spirits and El Tri are hoping to mount a serious title challenge even if they will be without several high-profile players.

Manchester United striker Javier Chicharito misses out after Mexican Football Federation respected Sir Alex Ferguson’s wish to give the youngster extra time to rest this summer, whereas Real Sociedad’s Carlos Vela has declined invitation to take part in this tournament. As a result, veteran defender Carlos Salcido and former Barcelona hotshot Giovani Dos Santos are now the only true stars, but the squad are brimming with talent from domestic league.

Mexico haven’t had a lot of success at the previous Olympics tournaments, but they are determined to make things right this time. Their biggest achievement was fourth-place finish at the 1968 Olympics held in Mexico City, whereas El Tri also made quarter-finals at the 1996 Games in Atlanta. After crashing out in group stage in Athens, Mexico failed to qualify for the games in Beijing.

Luis Fernando Tena has spent his entire coaching career in Mexico and he currently has two Mexican First Division titles to his name. The 54-year-old is currently employed as an assistant manager to Mexico boss Jose Manuel de la Torre and he led the Under-23 side that took part at the 2011 Copa America. While the team lost all three games at this major tournament, they improved to win the 2011 Pan American Games later that year. Tena prefers a slick passing style of football and he wants his team to be as dominant as possible.

When it comes to key players, all the usual suspects are out of the squad, so Giovani Dos Santos is the obvious choice for team leaders. While the youngster has suffered numerous disappointments on club level since leaving Barcelona, he always managed to produce his best football when playing for the national team and we have no doubts this will be the case at the Olympics as well. Veteran defender Carlos Salcido brings much needed experience to the side, but exciting attacker Marco Fabian could easily explode in London. Despite being mostly used in midfield, the 22-year-old has scored 12 goals in 10 games for the Under-23 side and he is expected to continue the impressive scoring run at the Olympics.

Mexico may be coming to the 2012 Olympics without several important players, but they’ve got plenty of talent among the ranks and have already played two major tournaments with the Under-23 squad. El Tri should have no problems progressing from the group stage, before they face either Uruguay or Great Britain in the quarter-finals. Luis Fernando Tena could even make it to the last four, but that will probably be the end of the road for them.