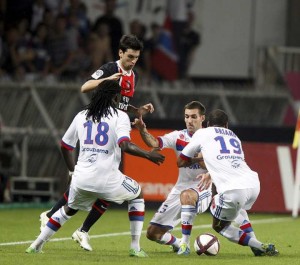 The two clubs appear to have switched their roles over the last few years, seeing that it is PSG who are leading the title race and Lyon struggling to stay in contention for the European places, instead of vice verse as we were used to.

Olympique Lyon are going through a very rough patch at the moment and this derby game definitely comes at a bad time.

Les Gones are low on confidence after the back to back defeats to Caen and Bordeaux, and they are slowly slipping down the Ligue 1 standings.

Remi Garde’s side currently occupy the sixth place in the standings and they have got to try and win this game in order to remain in the race for Champions League places.

However, les Gones are not looking very good at the moment, meaning that odds of 2.40 (7/5) offered by 888sport on home win are definitely not worth taking.

Boss Garde has confirmed that Yoann Gourcuff and Dejan Lovren are not in contention for the PSG game, but Aly Cissokho and Lisandro Lopez are expected to return to the starting line-up.

Boosted by the heavy recruitment in the last two transfer windows, Paris Saint-Germain are slowly becoming a real force to be reckoned with in French football.

Given that this is the first season in which the Saints are considered serious title contenders, it is hardly surprising that they are experiencing certain problems, both on domestic and European stage.

Paris Saint-Germain remain the Ligue 1 leaders, but they are just one point clear of second-placed Montpellier and cannot seem to break away from their rivals.

On the other hand, the Saints have been pretty disappointing in Europe, having failed to qualify for the Europa League knockout stages.

Carlo Ancelotti’s side are not really playing to their potential at the moment, having won just one of their last three games, but at odds of 3.40 (12/5) offered by Victor Chandler, PSG look a good bet here.

Momo Sissoko and Milan Bisevac miss out through suspension and injury respectively, whereas Marcos Ceara and Christophe Jallet are also unlikely to feature.