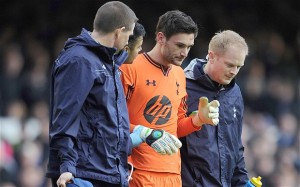 Tottenham manager Andre Villas-Boas believes goalkeeper Hugo Lloris will be fit to feature for France in the World Cup qualifying play-offs against Ukraine.

The Portuguese coach was heavily criticized for his decision to leave Lloris on the pitch following the nasty clash with Romelu Lukaku a week ago, and the Frenchman has in turn missed the weekend’s match against Newcastle.

Villas-Boas says it was only a matter of precaution and he is confident the 26-year-old will be fit to face Sweden on Friday.

“The medical department felt it was probably a bit too soon. I expect he will be able to play for France.” said Villas-Boas.

“It’s a test they do, which they value a lot, called an impact test so I had to stick to what they said.

“Nothing has come to light; he is absolutely fine. The medical department advised us not to use the player. We followed rules.”