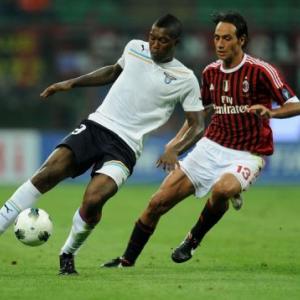 Having revived their title ambitions with the 3:0 victory over Chievo, Lazio will fancy their chances in the crunch tie against reigning Serie A champions.

Milan recorded an easy win over Cagliari to remain one point behind Juventus, but the Rossoneri now face a much difficult task.

Lazio boss Edy Reja may have problems concentrating on this match in the light of Djibril Cisse’s proposed move to QPR and Keisuke Honda’s expected arrival at Olimpico, but the boss will try everything to remain calm and focused before what could be a game of the season for his side.

The Biancocelesti have been pretty inconsistent of late, with home draws against Udinese and Chievo as well as 4:0 defeat to Siena threatening to hurt their Champions League hopes.

However, Lazio then recorded convincing victories over Atalanta and Chievo, while being very unfortunate to lose at Giuseppe Meazza after largely outplaying high-flying Inter.

Edy Reja’s side did lose their Coppa Italia clash to Milan at San Siro, but circumstances are now completely different, so bear in mind BetVictor pays 3.30 (23/10) on home win.

Djibril Cisse is out of contention as he is set to complete his switch to QPR, whereas Stefano Mauri, Cristian Brocchi, Lorik Cana and Libor Kozak remain long-term casualties.

Milan recovered well from the slow start to the season and the Rossoneri have been in excellent form over the last few months.

Maxi Allegri’s side were not too downhearted by the Derby della Madonnina defeat to Inter even if they had completely outplayed their arch rivals, and they went on to win next four games in all competitions.

Milan made it to Coppa Italia semi-finals by beating Novara and Lazio at home, while they eased off to Serie A victories over Novara and Cagliari.

The Rossoneri, therefore, enter the Lazio game high on spirits, and they look a good bet at 2.30 (13/10) offered by Sportingbet.

Thiago Silva and Luca Antonini are back in contention, but Flamini, Cassano, Yepes, Aquliani, Gattuso, Boateng, Pato and Merkel are all unavailable.