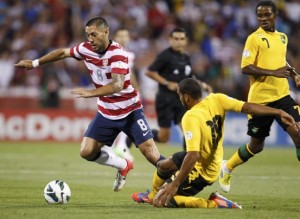 German coach Jurgen Klinsmann has announced a 24-man squad for the 2014 World Cup qualifiers against Antigua and Barbuda and Guatemala.

Tottenham summer signing Clint Dempsey and LA Galaxy star Landon Donovan are among the players expected to arrive in Miami during the next 24 hours as the national team begin preparations for crucial World Cup qualifiers.

Roma midfielder Michael Bradley is back to the side after missing the last few weeks of action through injury, but AZ Alkmaar forward Jozy Altidore misses out despite scoring 8 goals in as many Eredivisie games this season.

United States are tied on points with Guatemala and Jamaica after four qualifying games, meaning they need to take at least four games from the next two games in order to remain in contention for a place at the tournament finals.

“The mentality we are bringing into these two games is to get six points,” Jurgen Klinsmann said. “It’s important that the players arriving into Miami prepare themselves for two ‘finals’.

“We must have urgency within the group and a clear understanding that we need to deliver, which means each player has to bring a 100 per cent effort.”

The problem is Michael Bradley, Jermaine Jones, Maurice Edu, Fabian Johnson and Graham Zusi are all one yellow card away from a suspension, meaning that Klinsmann is likely to rest some of them in the Antigua and Barbuda game.

United States are hot favourites to win in Antigua and Barbuda, with 188BET paying 1.20 (1/5) on Jurgen Klinsmann’s men.