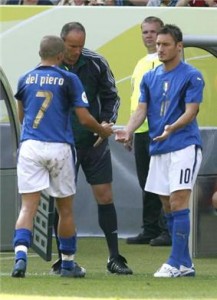 Italy coach Cesare Prandelli has failed to rule out the possibility of including veterans Francesco Totti and Alessandro Del Piero in the 23-man squad for European Championship finals.

With the former Fiorentina boss really short of options in attack after Villarreal forward Giuseppe Rossi was ruled out through injury, he could decide to call on the two experienced forwards.

Roma’s Francesco Totti has been constantly tipped to come out of retirement over the last few years, whereas Alessandro Del Piero never really said goodbye to the national team even though he hasn’t played a single game for the Azzurri over the last four years.

“When it comes to dealing with Totti and Del Piero, it requires great respect,” Prandelli told Roma Channel.

“Will they be called up for Euro 2012? It is best not to say things like that, but they have certainly given so much and I am convinced they still have much to give.

“The evaluations I will make when choosing a squad will not only be regarding their birth certificates, but also design and continuity.”

Meanwhile, the talented tactician confirmed that Antonio Cassano will probably make the squad despite only recently returning into action.

“We are waiting for him. He is recuperating with great enthusiasm and determination from the problem he had to deal with.”

The Azzurri face a tough task at the Euro 2012 finals, having been placed alongside reigning champions Spain, Croatia and Ireland Republic.