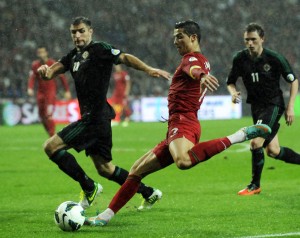 The first match of Friday’s programme will see very motivated Israel tackle underperforming Portugal in an attempt to remain in the race for the place at the tournament finals.

Since becoming a member of UEFA in 1994, Israel have failed to qualify for a major tournament, even if they were close on several occasions.

The team showed a lot of promise in the Euro 2012 qualifiers, even if they ended up behind Croatia and Greece, but three defeats in four warm-up games were hardly a perfect introduction into the next qualifying campaign.

As a result, Israel could only bring one point from Azerbaijan, before losing 4-0 at home to Russia, although they did show some improvement to record two comfortable wins over Luxembourg.

With coach Eli Guttmann now set to deploy an ultra-defensive approach, there may be some value in backing the hosts not to score, at odds of 1.91 (10/11) offered at SkyBet.

Chelsea midfielder Yossi Benayoun has been named in the squad despite the lack of first team action at Chelsea, but he is likely to start on the bench.

There are no fresh selection issues for boss Eli Guttmann ahead of the all-important 2014 World Cup qualifier against Portugal.

After quite a while, Portugal produced a promising display at a major tournament, having only missed out on a place in the final after losing to Spain on penalties.

As a result, the team were expected to start the World Cup qualifiers with a bang, and while they recorded opening wins over Luxembourg and Azerbaijan, the Seleccao were pretty disappointing in their last two qualifiers.

Narrow defeat in Russia and home draw with weak Northern Ireland should serve as a wake-up call for Paulo Bento’s side, with Portugal now in desperate need of a win in Israel.

With star player Cristiano Ronaldo in excellent form at the moment, Portugal look a good bet to win in Israel, with 888sport paying 1.57 (4/7) on away win.

On the other hand, the Real Madrid star is 1.67 (2/3) at Sportingbet to score in his fourth successive match.

Register Now
Compare and find the best Betting Odds for this week's football matches
We Highly Recommend These Places
Share your Opinion!