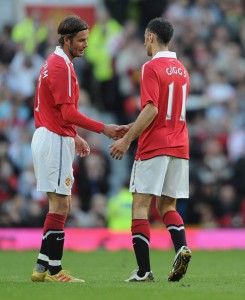 Manchester United midfielder Ryan Giggs admits he is disappointed by the fact that David Beckham was left out of the Great Britain squad for the 2012 Olympics.

The LA Galaxy star had a big role to play in helping London get the tournament and he was widely tipped to be one of three players over the age of 23 in Stuart Pearce’s squad.

However, the former England assistant opted for Micah Richards instead, with two remaining places going to Ryan Giggs and Craig Bellamy.

This has come as a major blow to team’s title hopes after Tottenham winger Gareth Bale was ruled out of the tournament through injury.

Ryan Giggs admits he is disappointed not to be playing alongside his former Manchester United teammate.

“As a former teammate and friend of David’s, I’m immensely disappointed for him,” the Welshman told BBC Sport.

“I wish he was in the squad, but it’s Stuart Pearce’s job to pick a team that he feels can win the gold, and that’s what he’s done.

“Unfortunately David isn’t in that 18, but he’ll take it on the chin. It’s one of those things that just wasn’t meant to be.”

Great Britain have been drawn alongside Senegal, United Arab Emirates and Uruguay in Group A, and Stuart Pearce’s side are 8.00 (7/1) with Ladbrokes to win the coveted tournament.