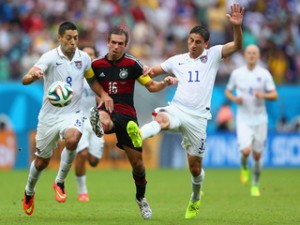 The 2014 World Cup winners host United States in an international friendly, three days ahead of the Euro 2016 qualifier against minnows Gibraltar.

Buoyed by the impressive 4-3 triumph over Netherlands at Amsterdam ArenA, Jurgen Klinsmann and his men will be looking to claim another major scalp.

Germany finally lifted a major trophy as they emerged victorious at the 2014 World Cup and they did it in style, hammering hosts Brazil 7-1 before defeating Argentina in the final.

Joachim Low has since seen quite a few star players retire from international duty, with the likes of Antonio Rudiger, Karim Bellarabi and Max Kruse getting more playing time.

Germany had a somewhat slow start to the Euro 2016 qualifiers, and they look set for an exciting battle with Poland, Scotland and Ireland for top two places in Group D.

Following the 2-2 home draw with Australia, die Mannschaft defeated Georgia in a qualifier and they are now 1.44 (4/9) to see off USA as well.

The likes of Marco Reus, Manuel Neuer, Thomas Muller, Toni Kroos and Benedikt Howedes have been allowed to rest after a long season and they were not even named in the squad.

Meanwhile, Mats Hummels misses out through injury, whereas Jerome Boateng is unlikely to start Wednesday’s encounter.

The United States national team have progressed a great deal under Jurgen Klinsmann and their quality was there for everyone to see at the 2014 World Cup.

USA pipped the likes of Portugal and Ghana to a place in the knockout stages, before giving Belgium a real run for their money in the last 16 phase.

Jurgen Klinsmann’s charges were narrowly beaten by Germany in the group stage, meaning this will be a perfect opportunity for them to get revenge, so bear in mind away win pays 7.50 (13/2).

In an attempt to reduce the gap behind world’s top sides, the German coach insisted that the national team chiefs schedule matches against the strongest teams and his approach is already producing results.

After the 1-1 draw with Switzerland, Team USA defeated both Mexico and Netherlands in international friendlies and they can be trusted to produce another strong performance at RheinEnergieStadion.

Jurgen Klinsmann could make minor changes to the team that won at Amsterdam ArenA, with DeAndre Yedlin expected to start.