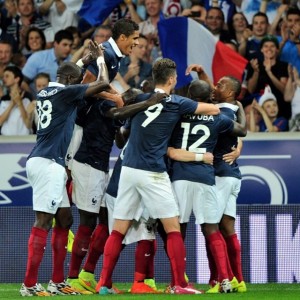 Euro 2016 hosts and one of the main candidates for the trophy France play host to Scotland in their final warm-up fixture, hoping to extend the impressive run of results.

After failing to properly test less than impressive Italy in the 1-0 defeat in Malta, Gordon Strachan’s men will be looking to improve up front when facing Les Bleus.

France have had two years to prepare for the Euro 2016 finals without worrying about the results or qualification and they appear to have put the time to great use.

Didier Deschamps was not afraid to own up to his mistakes and eventually handed call-ups to Dimitri Payet and N’Golo Kante, who appear to have already nailed down regular starting berths.

The West Ham hotshot has been especially impressive since returning to the national team fold, playing a key role in victories over Netherlands, Russia and Cameroon.

Les Bleus have been scoring goals for fun of late, but they now need to sort out the leaky back line that has conceded two goals in each of their last three outings.

With Raphael Varane and Mamadou Sakho both missing, and Lassana Diarra also withdrawing due to injury, that will be no easy task, but France have been rightly made 1.33 (1/3) favourites to defeat Scotland.

Antoine Griezmann is back in contention after playing for Atletico Madrid in the Champions League final, while Morgan Schneiderlin has replaced Lassana Diarra in the squad.

Yohan Cabaye and N’Golo Kante are vying for the starting berth, while Adil Rami and Laurent Koscielny should continue at the back despite failing to impress against Cameroon.

Scotland managed to show a great deal of promise in the Euro 2016 qualifiers even if they ultimately failed to progress from what was a pretty difficult group.

However, manager Gordon Strachan and his men will certainly have something to build on ahead of the 2018 World Cup qualifying campaign.

The Tartan Army have since defeated Czech Republic and Denmark in international friendlies, and it’s a shame that a number of first team regulars made themselves unavailable for the Italy and France games.

As a result, Scotland were far from impressive in the 1-0 loss to Italy in Malta, but Gordon Strachan admits he has relished spending two weeks with the squad and he hopes his side will show much needed improvement against France.

Lee Wallace, Alan Hutton and Chris Martin all withdrew from the squad, but a number of important players will be back to the side.