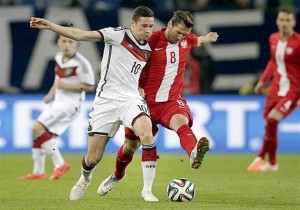 World Cup holders Germany will be hoping to get revenge on Poland for the 2-0 loss in Warsaw and at the same time leapfrog the group leaders in the standings.

Meanwhile, the White Eagles are aware they cannot afford to relax just yet and need to try and avoid defeat in Frankfurt.

The long wait for a major title finally came to an end as Germany lifted the 2014 World Cup trophy, but coach Joachim Low also saw a number of high-profile players retire from international duty.

Germany began the Euro 2016 qualifiers with a new-look squad that experienced some problems at the start, but have been showing constant improvement of late.

But, despite recording three straight wins against the group’s weakest sides, die Mannschaft have just one win over top 4 teams in the group and they desperately need to improve on that record when facing Poland.

In spite of the 2-0 loss in the reverse fixture, Germany remain hot favourites to win this match and they can be backed at 1.30 (3/10) to claim maximum points.

Joachim Low is sweating over the fitness of playmaker Mesut Ozil, who is carrying a knee injury, but the Arsenal star might just make the starting line-up.

Poland have clearly enjoyed one of the best starts to a qualifying campaign and to be in the lead of such a strong group with four games to do is a remarkable achievement.

The problem is that the likes of Germany, Scotland and Republic of Ireland all still hope to clinch automatic qualifying berth, meaning the White Eagles will have to continue with quality performances.

Poland have done pretty well on the road in the current qualifying campaign, scoring 11 goals in wins over Georgia and Gibraltar, while holding Republic of Ireland to a 1-1 draw.

Given the circumstances, Adam Nawalka’s men would be delighted with yet another point from the road, and they are 3.90 (29/10) to avoid defeat in Frankfurt.

Sevilla star Grzegorz Krychowiak has recovered in time to feature in the high-profile match, but Michal Pazdan was forced to withdraw.

Karol Linetty is a minor doubt after suffering a head injury, but there are no other worries for boss Adam Nawalka.