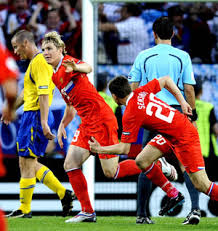 Sweden hope to build on the hard-earned point in Austria when they host very good Russia side, even if star player Zlatan Ibrahimovic remains a major doubt.

Fabio Capello’s side hammered Liechtenstein in their opening clash, but they clearly face a much tougher task in Solna.

While failing to qualify for the last two World Cup finals, Sweden have played at four successive European Championship tournaments, albeit only once getting past the group stage.

Blagult were placed in an evenly matched group with Russia, Austria and Montenegro this time out, and they appear to be in a good position to secure their place at the tournament finals.

In spite of some very disappointing results in warm-up games, Sweden enjoyed a good start to the qualifying campaign, holding Austria to a 1-1 draw on the road.

Erik Hamren’s side now hope to build on that result and defeat Russia, and they are 2.63 (13/8) to succeed in their quest.

The problem is that captain Zlatan Ibrahimovic is almost certain to miss out with a heel problem, and we all know how important he is for this team.

Italian coach Fabio Capello has survived the disappointing 2014 World Cup campaign to remain at the helm, and his side have since recorded two comfortable wins over very weak opponents.

Following the 4-0 friendly triumph over Azerbaijan, Russia recorded the same result in the opening Euro 2016 qualifier against Liechtenstein, but things get much more serious from the Sweden clash.

Many pundits still believe the Italian coach has failed to get the best out of his side and odds of 3.00 (2/1) offered on away win are enough to suggest his charges face a tough task against Sweden.

Talented full-back Georgy Shchennikov has been recalled after recovering from a serious injury, while Krasnodar midfielder Yuri Gazinsky receives his first call-up.

The likes of Anyukov, Zhirkov, Denisov, Shirokov and Bystrov have been overlooked, with Dmitry Poloz another surprise addition.