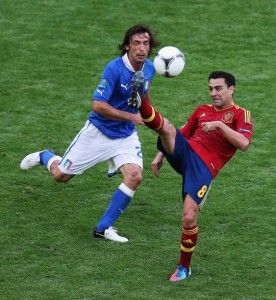 The stakes will be high when Italy tackle Croatia at Stadion Miejski in Poznan seeing that the two sides are likely to decide on the second team that reach the quarter-finals from Group B.

Having shared spoils with mighty Spain, the Azzurri would remain in a good position to qualify even with one point from this match, while Vatreni may need a win to make it through.

Italy’s preparations for the tournament finals haven’t gone as planned, with the match-fixing scandal, numerous injuries and 3-0 defeat in their final friendly game all predicted to have a destabilizing effect on the squad.

Nonetheless, the Azzurri once again proved they tend to deliver when everybody writes them off, and the scintillating display against reigning champions Spain hinted Cesare Prandelli’s side could even go all the way at the Euro 2012.

Italy are now expected to build on the impressive showing against La Furia Roja, and even though they will not have an easy job, odds of 2.30 (13/10) offered on home win at 888sport look too good to pass.

Boss Prandelli has received some good news as centre-back Andrea Barzagli resumed training after recovering from injury, but the Juventus defender won’t be considered for the Croatia game.

The former Fiorentina boss is unlikely to make big changes to the side that shared spoils with Spain, although Antonio Di Natale could come in for Mario Balotelli.

Croatia faced a tough task in their opening game against the well organized Ireland side, and Slaven Bilic’s side were under pressure as they needed a win before the clashes with Italy and Spain.

The Croats got off to a great start as Mario Mandzukic scored the opener early into the game and they restored the lead minutes before half-time after Sean St Ledger’s header had canceled out Mandzukic’s goal.

Everything was much easier in the second half, especially after the Wolfsburg striker scored his second goal and Croatia ended up 3-1 winners.

While Slaven Bilic’s side were the dominant force throughout the game, they were very fortunate to score at least two of the three goals and they will now face a much tougher task against confident Italy.

Indeed, the Croats seem to have more than enough attacking potential, with Modric, Perisic and Rakitic creating chances for Jelavic and Mandzukic, but their back line is pretty pathetic and I just don’t see how they are going to stop the likes of Di Natale and Cassano.

Everything suggests we will see another high-scoring game, and you should know Stan James pays 2.62 (13/8) on over 2.5 goals.

Boss Slaven Bilic is expected to move full-back Darijo Srna further up the pitch, with Domagoj Vida taking his place on the right side of defence.

Vedran Corluka and Gordon Schildenfeld will continue in the heart of defence in spite of the dismal performance against Ireland and that is something Italy will be looking to take advantage of.