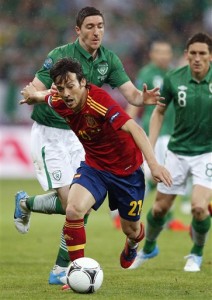 Croatia remained in a good position to qualify after the 1-1 draw against Italy, whereas Spain climbed to the top of the standings thanks to a 4-0 triumph over Republic of Ireland.

The winner of this tie is going to qualify for the quarter-finals, while both sides can go through if Italy fail to beat Ireland or if they play out a 2-2 draw.

Croatia did really well to record a convincing victory over the Irish in their opening game, but they found themselves in real problems during the opening exchanges of their clash with Italy.

The Azzurri largely dominated the proceedings and they looked to be on road to victory after Andrea Pirlo scored the opener just before the break.

However, the Croats raised their game a great deal in the second period and managed to earn a valuable point thanks to Mario Mandzukic.

Slaven Bilic’s side now need at least one point to make it to the next round seeing that Italy are expected to beat Ireland, and draw pays 3.35 (47/20) at 188BET.

The talented coach is expected to reinforce his midfield department for the Spain game, with defender Domagoj Vida likely to start at right-back and Darijo Srna to be moved to right wing.

Spain had a pretty slow start to the Euro 2012, seeing they were far from impressive in their opening game against Italy, but things soon fell into place.

With Fernando Torres replacing Cesc Fabregas and acting as a natural striker, La Furia Roja looked much better on the pitch and recorded a 4-0 victory in their second game.

The comfortable win over the Irish put Spain in the driving seat, which means they only need one point, not only to qualify but to win the first place in the group.

Sergio Busquets has been declared fit after recovering from a foot injury, while Fernando Torres should keep his place after scoring a brace against Ireland.

Alvaro Arbeloa, Jordi Alba, Fernando Torres, Xabi Alonso and Javi Martinez are all one yellow card away from suspension.