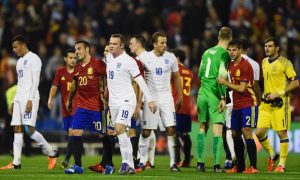 Buoyed by the 3-0 derby win over Scotland, England will be hoping to extend the bright run of results when they take on Spain at Wembley.

La Furia Roja defeated FYR Macedonia to gain control over Group G of 2018 World Cup qualifiers, and they, too, will be aiming to end the year on a high.

With the Euro 2016 failure and Sam Allardyce controversy, England have had their share of problems of late, but they appear to be returning to the right track.

Interim manager Gareth Southgate appears to have brought instant improvement, but it remains to be seen whether he will be appointed as permanent Three Lions boss.

Following the 1-0 away win over Slovakia, masterminded by Big Sam, England went on to take seven points from next three qualifiers.

While they could only muster a goalless draw in Slovenia, the Three Lions enjoyed comfortable wins over Malta and Scotland at home, climbing to the top of Group F.

England are now available at 3.00 (2/1) to see off Spain at Wembley, and it is important to note that they have won two of last three home matches vs La Furia Roja.

Tottenham striker Harry Kane has returned to the club as Gareth Southgate doesn’t want to risk him picking up an injury, while Jamie Vardy should come in for Daniel Sturridge.

Spain are another top side that did were pretty disappointing at the last two international tournaments, but they have been showing signs of improvement under Julen Lopetegui.

Apart from the qualifier against Italy in Turin that ended all squared, La Furia Roja didn’t have too many difficult fixtures so far, although they did well to beat Belgium in a friendly game on Lopetegui’s debut.

Meanwhile, they defeated Liechtenstein, Albania and FYR Macedonia in competitive matches, without conceding a single goal in the process.

The last of those wins was achieved without a host of first team regulars, with strength in depth clearly giving Spain advantage over smaller European sides.

It remains to be seen whether under-strength La Furia Roja will be a match to improving England, but bear in mind that away win pays 2.55 (31/20).

Sergi Roberto should be back to the side after recovering from injury, while Alvaro Morata is fit to play as well. Ramos, Pique, Iniesta, Alba, Costa and Martinez are all out injured.