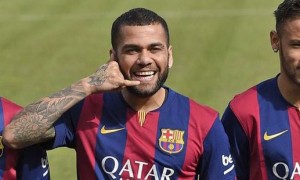 Juventus full-back Dani Alves is set to wear the captain’s armband in the World Cup qualifier against Colombia, Brazil coach Tite has revealed.

After Barcelona superstar Neymar informed the national team boss that he does not want to be the captain any more, Tite had a tough task of finding a perfect successor.

And while Inter Milan defender Miranda wore the armband vs Ecuador, the coach has now revealed that Dani Alves will be given the honour in the high-profile game vs Colombia.

Instead of appointing a permanent captain, Tite has decided to change his captain from one game to another, so it is now the full-back’s turn to lead his teammates into battle.

Brazil had a pretty disappointing start to the 2018 World Cup qualifying campaign, taking just 9 points from first 6 games, but they impressed to beat Ecuador in Quito few days ago.

Buoyed by the 3-0 triumph over La Tri, the Selecao are now available at 1.62 (5/8) to see off Colombia as well and finally climb into qualifying positions.