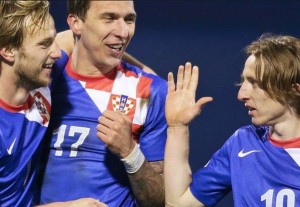 Football is sitting in shadow with Croatia troublesome fans determined to take centre stage in attempts to ruin their national team’s Euro 2016 campaign. Developments in the stands will be under scrutiny as European Championship organisers struggle to deal with a wild element of the Croatian supporters in the game against Spain.

Croatia’s 2-2 draw with Czech Republic was halted when supporters threw flares and caused tantrum on the stands ruining their national’s team efforts on the pitch. With their concentration visibly disturbed, Croatia players suffered a late equalizer to the Czech which means they still need a point from their game against Spain to qualify. UEFA opened disciplinary proceedings after the match as Croatia fans repeated the offense which occurred during a 1-0 win over Turkey as well. Members of Hajduk Split’s Torcida were believed to be responsible for the riots and that was their way to show discontent with Croatian Football Federation and its leading figures. It has been feared that Croatia fans will return with unrest as they plot to have their country expelled from the competition.

Croatia manager Ante Cacic is unlikely to make significant changes to his team for the final game of the group stage. However, influential midfielder Luka Modric is likely to miss the Spain game as he is deemed unfit for the occasion.

No Pressure on Spain?

La Roja have already qualified to the Euro 2016 knockouts having recorded two opening wins at the competition, but they will still be keen to win the group and meet a third-placed team in the round of last 16. Should Vicente del Bosque’s men lose to Croatia it would mean that they will have to go face to face with Italy, the winners of Group E and La Roja are highly motivated to unload the pressure off of their backs and put in another compelling performance. A point would be just fine as Spain manager Del Bosque looks to rest a couple of players for the elimination stage. Alvaro Morata has had a brilliant performance in the 3-0 win over Turkey as Juventus striker scored a brace to cap a wonderful game for his national team and he will be a man to watch once more if he gets a chance to play against Croats. Spain will have to be careful of their fans as well as La Roja supporters have not been blameless themselves. Several Spain’s fans were arrested in attempt to bring flares into the stadium ahead of the match against Turkey and security will be a major issue for the upcoming match.

Andres Iniesta is likely to be given some time off in order to be fit for knockout stage of the competition, while Alvaro Morata could also remain on the bench despite his brace against Turkey. Aritz Aduriz could get a piece of action in the final game of the group stage in his place.

Spain have already secured their place in the knockouts, but will still have plenty to fight for against Croatia and La Roja are expected to put in a fight in attempt to halt the under-pressure Croatia, whose efforts have been ruined by troublesome supporters.