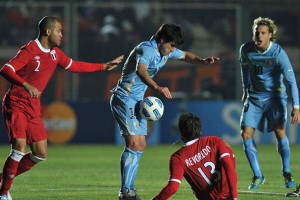 Not too many people could have predicted that the two teams would come on top of their respective quarter-finals games, considering that Colombia and Argentina were seen as hot favourites to go through.

However, the reality is that Peru and Uruguay are fighting for the place in the final, after the majority of South American giants were eliminated in the first knockout round.

Traditionally one of the weakest sides in South America, Peru were seen as one of the underdogs at 2011 Copa America, especially after it had become clear that key players Farfan and Pizarro would miss the tournament through injury.

Nonetheless, that didn’t stop la Blanquirroja from taking four points in their first two group games, which proved to be enough for a place in the quarter-finals.

Peru were far from impressive in their clash with Colombia, having rode their luck throughout the game and they only made it into extra time because los Cafeteros missed several great chances including a penalty.

Sergio Markarian’s side now face a tough task against very good Uruguay side, but for those believing that Peru can go all the way, odds of 3.25 (9/4) offered by Stan James on Peru to qualify for the final might be very tempting.

Uruguay arrived to Argentine on the back of their impressive showing at the 2010 World Cup in South Africa, but la Celeste needed some time to hit the ground running.

After sharing spoils with Peru and Chile in their first two group games, Oscar Tabarez’s side managed to beat and Mexico and ensure the place in the next stage.

Uruguay then produced quite a coup by eliminating hosts Argentina on penalties to reach the semi-finals and they now have a great chance to win their first Copa America trophy after 1995.

Considering that Brazil, Argentina, Colombia and Chile have all been eliminated, it is little wonder Uruguay are just 1.85 (17/20) with Betfair to lift the coveted title.

Sebastian Coates returns to the side after missing the Argentina game through suspension, while Sebastian Eguren should replace the suspended Diego Perez. Edison Cavani continues to miss out through injury.