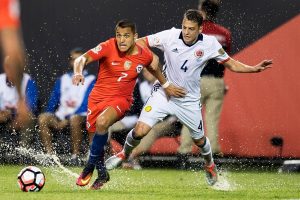 Two of South America’s top sides are locked in the battle with Argentina and few other teams for top 4 positions that secure automatic qualification, and no doubts that there will be plenty at stake when they square off in Barranquilla.

While Colombia have their star striker Radamel Falcao back to the side, Alexis Sanchez will be sorely missed for Chile as he has picked up an injury in training.

Los Cafeteros have largely impressed since Jose Pekerman took over the reigns, reaching the quarter-finals at the 2014 World Cup and 2015 Copa America, before finishing third at the 2016 Copa America Centenario.

But, in spite of some excellent results, the Argentine coach was quite brave to introduce some young, but very talented players to the side, while a number of experienced footballers continue to be overlooked.

This proved a very good strategy as Colombia have continued the rich vein of form, taking 17 points from first ten 2018 World Cup qualifiers to climb to fourth in the standings.

But, with Chile, Argentina and Paraguay breathing down their necks, Los Cafeteros need to continue winning, and they are now 1.91 (10/11) to see off La Roja.

After scoring 5 goals in last 4 appearances for Monaco, Radamel Falcao Garcia is back to the side, but it remains to be seen whether he will start against Chile.

Uncapped trio Davinson Sanchez, Jonathan Copete and Miguel Borja will be hoping to be handed international debuts, but Teo Gutierrez and Adrian Ramos were overlooked.

Having won back to back Copa America trophies, Chile have got to be considered one of South America’s leading sides, but they have yet to secure their place at the 2018 World Cup finals.

La Roja have been quite inconsistent in the current campaign, winning five and losing four fixtures, and they currently occupy the play-off berth.

During last two international windows, Chile won their home games, but lost on the road both times, and they will certainly be looking to improve their away form against Colombia.

However, the biggest problem is the absence of Arsenal superstar Alexis Sanchez, who has been ruled out after picking up a muscle injury in training.

Chances are that one of Nicolas Castillo or Edson Puch will be tasked with replacing the Gunners hotshot, playing alongside Eduardo Vargas up front.

Jorge Valdivia, Mauricio Pinilla and Matias Fernandez all miss out, whereas Gary Medel misses the Colombia game through suspension.