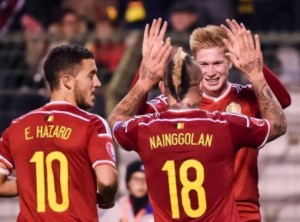 Media and the public alike were quick to write off Belgium following their disappointing loss to Italy at the opening of Euro 2016, but Red Devils got back up to their feet and bounced back with a comprehensive 3-0 victory over the Ireland.

Sweden have been one of main underperformers in the tournament so far with Erik Hamren’s men yet to manage a shot on target after two games.

The only goal scored in Sweden’s favour was an own-goal from Ireland’s Ciaran Clark in a 1-1 draw while Hamren’s men failed to exploit the presence of Manchester United target Zlatan Ibrahimovic in their attack.

Swedish are coming off from a frustrating 1-0 loss to Italy, conceded with only two minutes from time when Eder’s solo effort broke the deadlock.

Belgium are a must-win for Sweden who need all three points in order to keep their hopes of advancing through alive. A draw at Nice’s Allianz Riviera would spell trouble for Erik Hamren’s side who would be forced to pack their bags for an early elimination.

Hamren will have no selection worries for the upcoming match and Sweden are likely to field their strongest squad in efforts to record a win.

However, Ibrahimovic and co. are running low on confidence and we believe there is good value in the odds of 1.7 (7/10) @WilliamHill on both teams not to score in the upcoming game.

Belgium manager decided to make three changes to the side which lost to Italy opting to include the likes of Mousa Dembele and Yannick Carrasco in the team. Manchester City forward Kevin De Bruyne put in yet another inspiring display proving he is in top form at the moment.

Goals from Romelu Lukaku, who scored a brace in the match, and Axel Witsel who sealed the victory were enough to put fears of premature exit to bed and Belgium head into the next match with restored confidence.

Marc Wilmots’ side faces a stern task in their final match of the group stage against Sweden. Belgium need one point to advance into the last 16, but will undoubtedly be keen to record a win that would be a morale boost and another message to footballing community that Belgians should not be taken lightly.

With rivals Sweden down on their knees we see good value in the odds of 1.83 (5/6) @Ladbrokes on Red Devils to snatch three more points.

Belgium are likely to field a team with two holding midfielders to offer support for the attack line led by Chelsea star Eden Hazard. Nainggolan and Witsel will thus play instead of Marouane Fellaini, who is likely to be left on the bench despite a good performance against Italy.

Yannick Carrasco has confirmed his brilliant shape and is likely to keep his place in the starting line-up.