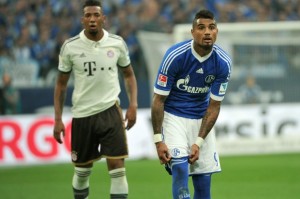 Having won all eight matches in 2014, Bayern Munich will be hoping to continue the trend when they host Schalke on Saturday afternoon.

The Miners go into the game on the back of the embarrassing 6-1 loss to Real Madrid in midweek, with several important players picking up injuries in the process.

After winning a historic treble of titles under Jupp Heynckes, there was not a lot of room for improvement in the Bayern squad, but new boss Pep Guardiola has somehow managed to do even better than his predecessor.

The Bavarians eased off to the DFB Pokal semi-finals, where the game against Kaiserslautern should be a walk in the park for them, while coming on the verge of Champions League quarter-finals.

Even if they suffered a real scare at the Emirates, Bayern enjoyed a 2-0 triumph in the first leg against Arsenal and are expected to finish the job at their Alianz Arena.

Meanwhile, their league campaign has been a huge success, with the Bavarians winning 20 of 22 league fixtures to open up a 19-point lead at the top of the standings.

And having conceded mere nine goals in the process, Bayern look a good bet to defeat Schalke to nil at 2.05 (21/20) at BetVictor.

The hosts, priced at 1.20 (1/5) to claim maximum points, will have Toni Kroos and Arjen Robben back after they were rested against Hannover, whilst Bastian Schweinsteiger is set to start as he needs match fitness.

The winter break did a lot of good to Schalke as key players Klaas Jan Huntelaar and Kyriakos Papadopoulos recovered from their respective injuries, and the team in turn enjoyed a good start to the New Year.

Four straight victories in the league seriously improved their top 4 hopes, but the good run ended with a goalless draw against Mainz at Veltins Arena.

The Miners hoped they would be able to show some improvement in the Champions League clash against Real Madrid, but things went terribly wrong as they were beaten 6-1 by their more illustrious opponents.

As if that was not enough, the likes of Felipe Santana, Kevin-Prince Boateng, Sead Kolasinac and Roman Neustadter all picked up injuries in the process.

The good news is that only the Brazilian defender has been ruled out to face Bayern, but Schalke are no less than 17.00 (16/1) to inflict the first league defeat of the season on the Bavarians.