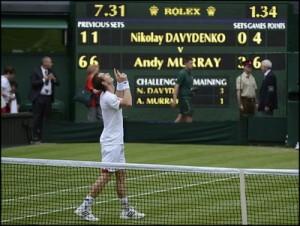 Andy Murray is still searching for his first ever Grand Slam title and he is now the third favourite at the Wimbledon 2012.

After Lukas Rosol recorded a shock victory over Rafael Nadal, the Scot is now the highest ranked player in his half of the draw and is 11/2 with William Hill for SW19 glory.

Novak Djokovic remains the number one favourite at 10/11, with Federer priced at 5/2. Andy Murray is 5/2 to lose in the final.

The Scot face Marcos Baghdatis on Saturday and he is 1/10 to win and 4/7 to win in three straight sets.

“Murray has a big chance to go on from here and prove his doubters wrong. He is third favourite to win but should really make it out of his half despite tough opposition,” said William hill spokesman Mark Young

“He is going to make hard work of it because that is what Murray does but this is the best chance he has ever had.”

Visit Betfair, world’s biggest betting exchange, and get 20% extra on your Wimbledon multiple winnings. Or, bet on Wimbledon 2012 at 888sport and get guaranteed free bets.