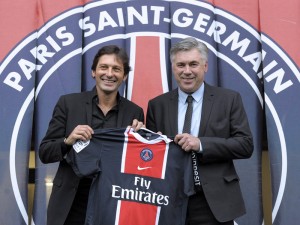 New Paris Saint-Germain manager Carlo Ancelotti has revealed that the Saints are not interested in Brazilians Kaka and Pato.

The former Milan boss made his debut on PSG bench in a friendly defeat to the Rossoneri, but he says he was happy with team’s performance.

“We played well and I’m happy with the way we faced Milan,” Ancelotti told Eurosport.

“We fought against a top team and it was emotional taking on my old club. It was a very special way to begin this adventure.”

It was Alexandre Pato who scored the winning goal, just days after the Brazilian has been heavily linked with a move to Paris Saint-Germain.

“There is no chance that Kaka could come to PSG as things stand because he has a contract with Real Madrid.

“We will buy players, but the clubs have to be ready to sell them. Pato is a Milan player and has a contract, so we are not interested in him.”

Paris Saint-Germain sit three points clear of their title rivals in Ligue 1 and they are now 1.62 (8/13) with 188BET to win the coveted title.