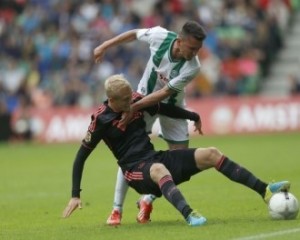 Following the great comeback in the third qualifying round clash against PAOK, Ajax hope to make a big step towards the Champions League group stages by winning the first leg against Rostov at Amsterdam ArenA.

Selmashi did well to eliminate Anderlecht in the previous stage, but they have since stayed without head coach Kurban Berdyev, and it remains to be seen how that will affect the team.

Ajax did the unthinkable last season as they lost the league title on the final day of the Eredivisie campaign, meaning they had to play in the Champions League qualifying stages.

The Amsterdammers were handed a tough draw as they faced PAOK in the third qualifying round, and they were quickly a goal down in the return leg after the first match ended 1-1.

However, Davy Klaassen proved the hero as he scored a brace at Toumba Stadium to take his team to the next stage, where they will meet FK Rostov.

The new boss will need some time to rebuild the youthful side, which lacks experience, especially up front, but the team have so far done really well to exceed expectations.

Following the away triumph over PAOK, Ajax defeated Sparta Rotterdam on the road, before they were denied a victory at home against Roda Kerkrade.

Ajax will have key stopper Joel Veltman back from domestic suspension, while new signing Bernard Traore has not been registered for the competition.

FK Rostov were the biggest surprise package in Russian Premier League and they came incredibly close to lifting the coveted trophy, only to finish second in the end.

The poor financial situation meant that coach Kurban Berdyev couldn’t properly reinforce the squad, but his side, nonetheless, got past the Anderlecht side to secure a place in Europa League group stages.

FK Rostov will now be vying Ajax for a Champions League berth, but they will have to do so without the colourful tactician, who has resigned to take over at Spartak Moscow.

His assistant coach Dmitri Kirichenko is now in charge of the side but he has yet to record his first triumph as FK Rostov head coach.

After sharing spoils with Ural at home, Selmashi squandered a two-goal lead against Zenit on the road, losing the game 3-2.

It remains to be seen whether Sardar “Iranian Messi” Azmoun will return to the side after missing the Zenit game through suspension.