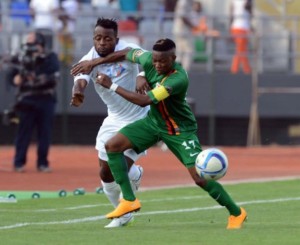 Having shared spoils with Congo DR in their opening fixture, Zambia will be hoping to show some improvement when they take on Tunisia on Thursday.

Les Aigles de Carthage are in a similar situation after seeing their lead against Cape Verde slip, and no doubt this will be a must-win game for them.

Zambia have been on a major uptrend over the last few years and they did brilliantly to secure the first ever Africa Cup of Nations trophy in 2012.

The Chipolopolos, however, failed to reach the 2014 World Cup, meaning they are still waiting for their first appearance at the tournament finals.

The current squad have been seriously rejuvenated by new coach Honour Janza, with the likes of Chris Katongo, Isaac Chansa, Joseph Musonda and Collins Mbesuma no longer in contention.

Experienced forward James Chamanga failed to make the cut after being named in the preliminary AFCON squad, which is enough to suggest his international career may have come to an end.

Zambia largely struggled in their opening game against Congo DR despite taking an early lead and they were somewhat fortunate to earn a 1-1 draw.

But, with important midfielder Nathan Sinkala suffering a tournament-ending injury, there is little value in odds of 4.40 (17/5) offered on the Chipolopolos.

Tunisia are still regarded as one of Africa’s most famous sides, although the team did not enjoy too much success of late.

While appearing at the 1998, 2002 and 2006 World Cups, Les Aigles de Carthage failed to win a single game in those three appearances, before failing to qualify for the next two tournaments.

Meanwhile, they managed to win their first ever AFCON title on home soil in 2004, but have since failed to get past the quarter-finals.

Tunisia were, however, pretty impressive in the 2015 AFCON qualifiers, winning four matches and drawing two to finish above Senegal, but they experienced some problems in their opening match against Cape Verde, earning a 1-1 draw in the end.

Nevertheless, Georges Leekens’ charges have reason for optimism ahead of the Zambia clash and they are 2.10 (11/10) to emerge victorious.

While Sami Allagui and Fabien Camus missed the final squad through injury, the likes of Anis Ben-Hatira and Saber Khalifa were left out.

Rangers defender Bilel Moshni has apologized to the boss for leaving the bench during the game as he was unhappy at not starting, but he is unlikely to be handed a starting role this time out.