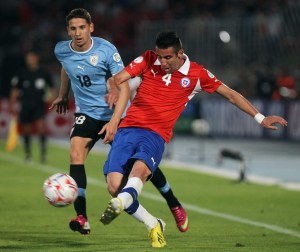 Buoyed by the 5-0 hammering of Bolivia, hosts Chile aim to get one step closer to lifting the Copa America trophy on home soil by defeating out-of-sorts Uruguay.

La Celeste may have failed to impress in the group stage, but they are hoping to make the sixth successive appearance in the Copa America semi-finals.

Tournament hosts Chile have been pretty impressive in the group stage, winning the first position without too many problems.

La Roja earned a hard-fought victory over Ecuador in the opening match before sharing spoils with Mexico in an entertaining 3-3 draw.

And while many feared that the incident involving Arturo Vidal that saw him spend the night in jail would destabilize the team, it appears to have had the opposite effect.

Coach Jorge Sampaoli and his teammates stood behind the Juventus hotshot and Chile in turn impressed to record a 5-0 triumph over Bolivia in their final group game.

La Roja have now been made 1.75 (3/4) favourites to defeat Uruguay in the quarter-finals, but the boss is seriously worried that the opposition may prove very dangerous at set-pieces due to their serious advantage in height.

As a result, Mauricio Isla and Jean Beausejour are certain to start on the flanks, with Gary Medel and Gonzalo Jara forming the centre-back pairing.

Uruguay arrived in Chile as the reigning Copa America champions, but the absence of Barcelona star Luis Suarez was considered a major blow.

La Celeste indeed struggled in their group, recording a hard-fought win over Jamaica, but losing to tournament favourites Argentina.

Oscar Tabarez’s charges, nonetheless, managed to secure their progress by playing out a 1-1 draw with Paraguay few days ago, and they are now set to face one of the strongest teams at the tournament finals.

The visitors will have key defender and captain Diego Godin back from suspension, but now left-back Alvaro Pereira is banned.

And with Sebastian Coates producing a commanding display against Paraguay, everything suggests that Oscar Tabarez will revert to a three-man defence, rather than using Jorge Fucile as a replacement for Pereira.

Having reached the Copa America semi-finals five times on the bounce, La Celeste can be backed at 3.25 (9/4) to do it all over again.