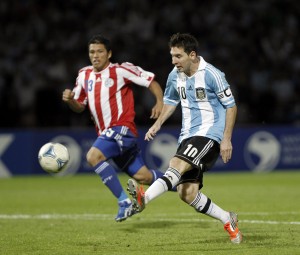 Following the narrow miss at the 2014 World Cup, Argentina arrive in Chile hoping to lift the Copa America trophy and they will be eager to start with a win.

Paraguay, on the other hand, have largely struggled of late and they will face problems trying to match the star-studded Albiceleste.

Argentina were not exactly on fire at the World Cup finals in Brazil, but they produced a number of strong performances to overcome all obstacles and reach the final.

La Albiceleste then had several amazing chances to score against Germany, but were unable to make their dominance count and eventually failed to lift the coveted trophy.

However, that will make the team even more determined to do well at the 2015 Copa America, with Gerardo Martino able to select from a very strong squad.

The likes of Leo Messi and Javier Mascherano have joined after winning the Champions League trophy and they look set to start against Paraguay, where La Albiceleste are 1.33 (1/3) favourites to claim maximum points.

Ezequiel Lavezzi and Ever Banega look set to lose their place in the side, while Pablo Zabaleta should be recalled.

Due to the incredible competition for positions in attack, the likes of Gonzalo Higuain and Carlos Tevez will have to settle for a place on the bench.

Paraguay have been on a major downtrend over the last few years, that is ever since they impressed at the 2010 World Cup.

The team have since shared spoils with Costa Rica and Honduras, while losing to Mexico, and it would appear as they have little to hope for ahead of the 2015 Copa America.

The biggest problem is the fact that the likes of Santa Cruz, Barrios, Valdez and others are well past their prime, so no wonder nobody expects them to surprise Argentina.

Coach Ramon Diaz has no selection worries at the moment and he is expected to field his side in a 4-4-2 formation, with Santa Cruz and Edgar Benitez tipped to start up front.