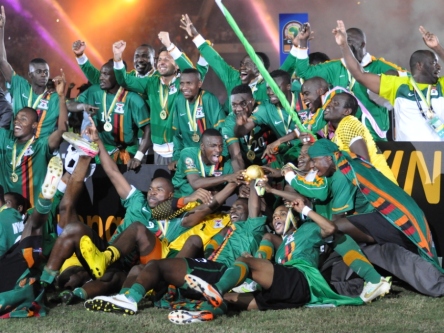 Zambia produced quite a coup by winning the 2012 Africa Cup of Nations title, and while many do not see Herve Renard’s team as the favourites at the 2013 tournament, it is important to note the Chipolopolo arrive in South Africa with a team even stronger than the one that achieved a historic success. Zambia almost missed out on the tournament finals as they only eliminated Uganda on penalties, but that doesn’t mean they are in South Africa only to make up the numbers.

This will be fourth successive Africa Cup of Nations appearance with Zambia for talented coach Herve Renard, and having done so well in the past, the Frenchman has every reason to feel optimistic about his side’s chances at this tournament. Veteran defender Kampamba Chintu has been left out, but important players William Njobvu and Jacob Mulenga are back after missing the 2012 Africa Cup of Nations.

For a country that have yet to qualify for a World Cup, Zambia boast a pretty impressive record at the Africa Cup of Nations. The Chipolopolos finished in third place in 1982 and 1990, while winning second place on two occasions, in 1974 and 1994. Their impressive showings at the 2012 AFCON earned the country its first ever Africa Cup of Nations title, which means Zambia arrive at this tournament as defending champions.

Veteran forward and captain Chris Katongo remains the number one player on the team sheet and he was also voted BBC’s African Footballer of the Year in 2012. His club teammate Issac Chansa is also an important member of the national team, but if we are looking for a player most likely to shine in South Africa, it has to be Emmanuel Mayuka. The talented forward will be very motivated to showcase his skills after he was not given a proper chance following the summer move to Southampton.

Zambia will be under intense pressure as the reigning champions, but they should have no problems qualifying for the quarter-finals. While the team boast a high-quality starting line-up, they also have a huge strength in depth, which could give them an extra edge over most sides in South Africa. This is one of the reasons why the Chipolopolo should be able to reach the semis, but I, nonetheless, doubt they can defend the Africa Cup of Nations title. Betfair pays 1.52 (13/25) on Zambia to qualify from Group C.

Get Your £25 Cash Bonus!
Great Asian Handicap odds for this week's matches with 12Bet. £25 FREE
We Highly Recommend These Places
Share your Opinion!