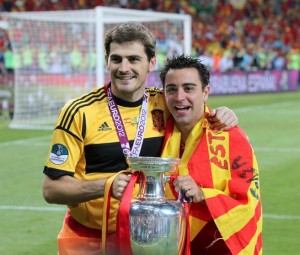 There is still some time to go before 2012 FIFA Balon D’Or is awarded, but debates are already raging about who should win the coveted trophy.

After winning the 2010 and 2011 titles, Lionel Messi is again the number one favourite, with Stan James paying 2.10 (11/10) on the Argentine, but many believe the Barcelona star is not such a strong favourite as the online bookmakers would suggest.

Following a very good season with Real Madrid and a promising showing at the Euro 2012, Cristiano Ronaldo is now 2.75 (7/4) to pip his arch rival to the trophy.

Euro 2012 Player of the Tournament Andres Iniesta is priced at 8.00 (7/1), which is a great value for one of the best players in the world, whereas Andrea Pirlo is no less than 34.00 (33/1) in spite of the memorable season he had with Juventus and Italy.

For the first time after quite a while, we have a goalkeeper in the mix, and Iker Casillas looks a good bet at 21.00 (20/1). The experienced shot-stopper has got to be taken into consideration after winning the La Liga title with Real and Euro 2012 trophy with Spain.

The father of his international teammate Pepe Reina, Miguel believes Casillas has a chance of winning this year.

“It is clear Casillas deserves (Ballon d’Or),” Miguel Reina told AS. “He had a great European Championship, and had a very good season with Madrid, winning La Liga.

“Honestly, for the work he’s done, he undoubtedly deserves it. I have no doubt that he has done more than enough to merit the award.

“Casillas has shown a human quality, and is a role model for all young people. Furthermore, he showed immense fair play in the Euro final.”