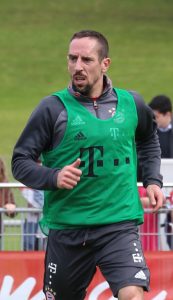 Franck Ribery has suggested that he intends to extend his playing career after announcing his Bayern Munich exit.

The French winger is set to depart the Allianz Arena upon the expiry of his contract at the end of the campaign and intends to keep playing football. However, the 36-year-old confirmed that he wanted to return to Bayern in some capacity at some point in the future.

Talking in a press conference, he said: “There are several options, but it is still a bit early to say what will happen next season.

“But there will be something, that’s for sure. I will play on for one or two more years, and then I will return 100 per cent to Munich.”

Ribery has enjoyed plenty of success since he joined Bayern from Marseille in 2007. He has gone on to make 422 appearances in all competitions, scoring 123 goals and providing a further 183. In that time, he has won eight Bundesliga titles, five German Cups, one German League Cup, five German Super Cups, a UEFA Champions League crown, a UEFA Super Cup and a FIFA Club World Cup.

Ribery could possibly make only three more appearances for Bayern as the 2018/19 season comes to a close. Niko Kovac’s men take on RB Leipzig on Saturday and the Frenchman is at odds of 6/1 with Paddy Power to score the opening goal of the game.